Those who rhapsodize about defending the freedoms guaranteed by the U.S. Constitution (even if all they’ve read is the last half of the Second Amendment) have a good point. Our rights don’t just sit there, inviolate, waiting to be enjoyed at random. They need to be defended around the clock from enemies foreign and domestic. 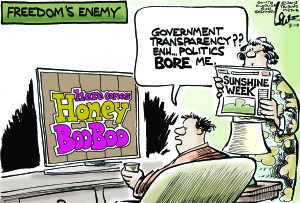 Protecting American interests abroad through military might is one area where there is basic agreement across the political spectrum. In the domestic arena of defending individual freedoms and liberties, however, Americans sustain a lively debate. Some feel that these principles are best maintained by the threat of armed rebellion—specifically the possession of personal firearms to ward off a hostile government bent on subjugating the populace.

Others believe that the greatest enemy to freedom is not government, but apathy. When the American people are asleep at the switch, abuses—and their fellow traveler, secrecy—flourish. The antidote is to develop a passionate involvement in our national affairs and how they are conducted. With this hunger for self-determination comes a mandate for transparency, and that in turn begets trust in our institutions.

The Founding Fathers spoke nobly of a viable democracy being predicated upon an informed electorate. We’re informed, all right—we know all the intimate details of the Kardashians’ private lives. We know what kind of kinky sex Jodi Arias had with her boyfriend right before she allegedly slit his throat.

That’s not a recipe for controlling the reins of government power. If Americans want to retain (some say “reclaim”) the privilege of seIf-government, they must work for it. In a democracy, nothing happens until the people demand it.

Brandishing firearms and shouting militant slogans may give some people a warm feeling, but the most powerful weapon in the American people’s arsenal is engagement. It’s the only way government can be forced to serve the people, rather than the other way around.