His friend’s disappearance launched him on a public records crusade

A Miami Dade College librarian has been named a member of the Sunshine Brigade of the First Amendment Foundation in Tallahassee. 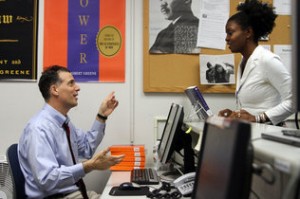 Miami Springs locals refer to Theo Karantsalis as “Civic Watchdog,” a title that hints at the respect he has earned through his work in tracking down public records as a journalist and librarian.

Karantsalis began looking for answers in public records after his childhood friend, Capt. Paul Lorence, was shot down in his Air Force jet during a 1986 U.S. airstrike on Libya.

Since then, one question remained on his mind: What happened to his friend and former babysitter?

“For many years the government kept telling me there wasn’t any information,” said Karantsalis, nominated by the First American Foundation as a member of the Sunshine Brigade, a group of about 40 civic-minded activists who have become experts on navigating public records laws.

Karantsalis, 49, began his quest in 2006, when he filed a lawsuit against the U.S. Department of Defense and the U.S. Air Force under the Freedom of Information Act, requesting records about his friend’s disappearance. He found out information did exist and he released the information to Harvard Law School. It was believed that Lorence’s aircraft was shot down over the Mediterranean Sea, according to the records.

“Although I found out what happened to him, I still don’t know where his remains are,” Karantsalis said, who still searches for answers today with help from the First Amendment Foundation. a nonprofit organization in Tallahassee that has launched the Sunshine Brigade statewide this week to raise awareness of public records laws.

“These are people who are citizen activists, thy tend to be very involved in issues in their community,’’ said Jim Rhea, director of the First American Foundation. “They may get resistance and then they learn the nuts and bolts of open government law.

“They’re mentors. They provide assistance and help teach people how to get access to public records.’’

Karantsalis, a Miami Dade College assistant library director, teaches an internet research class to show students and others that all government records are public, unless a statute says otherwise.

“There is no interest in educating and teaching students about this topic, but everyone has the nee d for information,” Karantsalis said. “We are living in the information age.”

On one occasion, Karantsalis even ordered video footage of a camera that was placed inside a water pipe by the Public Works Department in his Miami Springs residence.

“He is our best customer at requesting records,” said Magali Valls, Miami Springs city clerk. “He is very involved in what he does.”

Karantsalis, who was diagnosed with multiple sclerosis in 2002, is also a freelance writer for The Miami Herald, The National Herald, Multiple Sclerosis Foundation, and the River Cities Gazette.

“I share my information because I’m a librarian and I want citizens to know they have rights.”

We use cookies to optimize site functionality and give you the best possible experience. By continuing to use our site or by clicking 'Accept', you consent to our use of cookies. To learn more, please see our our Privacy Policy.Accept